— We’ll start with this hypothetical, where the Rockets’ league-worst record pays off and lands them the top pick（我们将以这种预测开始，火箭付出了联盟最差战绩从而得到了第一签位）. Oklahoma City’s pick hits at No. 2 (an 11.4% chance) and leapfrogs Detroit and Orlando, whose picks move down one spot. The rest of the lottery order stays chalk, with the Warriors keeping the Timberwolves’ pick at No 6. and Orlando keeping Chicago’s No. 8 pick.

— Part of why Cade Cunningham is such a good prospect is that he’s innately versatile, with the size and smarts to play a range of spots on the floor, making him a good fit for pretty much any team that wins the lottery. He remains the expected top pick with the draft two months out. That said, Cunningham is a particularly good fit in Houston, where John Wall (for however long he’s a Rocket) and Kevin Porter Jr. can help share playmaking duties and alleviate immediate pressure（坎宁安是一名非常适合火箭的球员，在火箭沃尔和小凯文波特可以帮助他分担组织的职责以及快速减轻压力）. His presence in this draft should eliminate the potential for anxiety Minnesota felt picking first in last year’s draft. He’s the top pick in each of our five scenarios here for good reason.

— Personally, I view Evan Mobley as an obvious No. 2 no matter which team is making the pick. That’s also going to remain constant across my projections moving forward, until we know about which team is picking second and what they’re doing. Mobley’s agility and length, high-level paint protection and range of offensive skills makes him a pretty remarkable prospect. I wouldn’t take him over Cunningham, though it’s not a ridiculous concept. Here he goes to Oklahoma City, where he’d walk into major minutes immediately. Teams will look hard at Jalen Suggs, Jalen Green and Jonathan Kuminga, but Mobley is an extremely safe investment at the top of the draft, and possesses a combination of frame and skill set that’s extremely tough to replicate.

— The third pick is where this draft gets a lot more interesting, no matter how the lottery falls. I’d project Suggs, Green and Kuminga all on the board (and perhaps a slim chance of Mobley), each with distinctly different skill sets and some variance of opinion on which is the best prospect. Suggs and Green are probably ahead of Kuminga in a broad sense right now, but there’s a lot left to play out, and ultimately this will hinge on which team ends up drafting third.

In this case, it’s Detroit, for whom Green is a pretty strong fit. The Pistons sorely need a scorer and are developing Killian Hayes as a lead playmaker. Suggs could make sense here too, but in this team-specific context, I’d probably lean Green, who exceeded expectations with G League Ignite and would immediately be one of the best individual shot-creators on the roster (granted, that isn’t saying a ton). The Pistons are playing the long game and could have a difficult choice in front of them if they wind up picking third or fourth, but Green may have a bit more untapped upside than Suggs, and that’s the direction they take here.

— I can’t underscore this enough: the No. 6 pick will be a massive inflection point in the lottery. I’ve written this previously, but I’ve found minimal consensus from scout to scout on which player is the sixth-best prospect in this draft class. The 6-to-15 range is considered extremely fluid and is obviously pretty wide. I’ve very lightly pencilled in Keon Johnson for the Warriors here. Scottie Barnes, James Bouknight and Davion Mitchell have pretty real chances of getting picked in the Top 10. International prospects Alperen Sengun and Josh Giddey have a real chance to trend upward as executives dig into film and get more familiar with them. Players like Kai Jones, Jalen Johnson, Corey Kispert and others project closer to the late-lottery/early teens at this point.

While we’re here, it stands to reason that Golden State will again explore a range of trade opportunities, particularly in the event they wind up with two lottery picks. Frankly, they aren’t going to get many more bites at the apple with Steph Curry playing at an MVP level. They probably also aren’t getting an immediate high-level starter in this draft. Missing the playoffs entirely this year was partially a byproduct of bad luck, but the Warriors will probably need to get more aggressive in reshaping the roster, and are operating on thin margins already due to their massive payroll and luxury tax payments. They’ll be a team to watch if the Minnesota pick conveys.

—Here, the Pistons cash in on their top draft odds, with the Magic landing the second pick and the Rockets falling to third, still a favorable outcome that lets them keep their selection. The Raptors benefit from some good luck and move up from seventh to fourth (an 8.5% chance), knocking down the Thunder and Cavs. The rest of the order is as expected.

—If the Magic end up picking twice—which is likely—their second selection will wind up as an interesting pivot point in the draft. It makes sense that Orlando will take whoever they like the most with their first selection, regardless of position, but that move will almost certainly influence which direction they take with the subsequent pick. Orlando loaded up on young talent after tearing its roster down at the deadline, with the next step being identifying which of those players they want to build around long-term. The Magic won’t be too worried about positions, but also will presumably avoid drafting players with clashing skill sets (for example, Jalen Green and James Bouknight). They make out well here with Bouknight and Mobley.

— Having Killian Hayes on the roster shouldn’t preclude Detroit from taking Cunningham first and moving toward a dual-handler attack. The Pistons are also a terrific fit for Mobley, but they’re not far along enough in their process to split hairs over positional fit. I suspect they’d look hard into him, but settle on Cunningham.

—The Raptors moving up anywhere in the top four from No. 7 (a 31.9% chance) is a pretty fascinating potential outcome, with Toronto positioned to bounce back after a strange season playing in Tampa. They haven’t drafted in the lottery since drafting Jakob Poeltl in 2016, and have a chance to add another promising piece to their core. They shouldn’t be hampered by positional fit, and rarely get a chance to draft blue-chip talent, so this is an opportunity for Toronto to take a big swing.

— This is Oklahoma City’s dream scenario, and the case for tanking in a nutshell. The Thunder’s pick converts on an 11.5% chance and wins the lottery. Minnesota gets a good pull, moving up to No. 2 (a 9.2 percent chance) and keeping its pick away from Golden State. Those two results, plus Orlando and Detroit staying in the top four, knocks Houston down to No. 5, which conveys that pick to OKC. Sam Presti and the Thunder would walk away with two top-five selections in this best-case outcome, pairing Cunningham with Kuminga and significantly strengthening the core of their rebuild.

—Minnesota has a 27.6% chance of picking in the top three and keeping its pick away from Golden State, which happens here. The Timberwolves would be faced with a pretty interesting decision at No. 2. The player that doesn’t fit for them is Jalen Green, whose skill set directly overlaps with Anthony Edwards. Jalen Suggs is a Minneapolis native and would add a much-needed defensive element in the backcourt. But Mobley is a pretty strong fit with Karl-Anthony Towns, who may need to play with another big that covers for him defensively, and would be my best guess here. There’s a lot riding on the lottery Minnesota, who would certainly rather send this pick unprotected next year and add a talented rookie now.

— Another thing to keep an eye on is which teams target bigs in the back half of the lottery. That group of players is somewhat unorthodox this year, with Alperen Sengun, Kai Jones, Jalen Johnson, Usman Garuba, and Isaiah Jackson all bringing extremely different skill sets to the table, and some of them will end up falling into the teens. The Kings, Hornets, Spurs should all be in the market for frontcourt help this summer, whether through the draft or free agency.

—Here’s a scenario where the Bulls get lucky, land in the top four and keep their pick away from the Magic (a 20.3% chance). Coincidentally, Orlando won the lottery and still made out pretty well here. Detroit drew third, New Orleans made a surprise jump to No. 4 (a 5.7% chance), and Houston fell out of the top five, which gave Oklahoma City consecutive picks at 5 and 6.

— If they do keep their pick, Chicago will probably be thrilled with just about anyone available in the top four, with Jalen Green being the only tricky fit given his overlap with Zach LaVine’s skill set, and the Bulls’ interest in returning to the playoffs as soon as possible. Mobley would be a serious game-changer for the Bulls, pairing with Patrick Williams to give them a versatile pair of young frontcourt players, and complementing Nikola Vucevic defensively.

— The prospect of Oklahoma City picking back to back is an interesting wrinkle. It requires the Rockets to drop to fifth and two teams to move in front of the Thunder’s starting position at No. 4, but it’s not out of the question. Here, they take a swing on upside with Kuminga and shore up their defense with Barnes.

— Cleveland winds up in a really tough spot here, with no obvious fit at No. 7. The Cavs are a good fit for Barnes and Kuminga, but both come off the board, which forces them to look at guards, or perhaps consider trading back. The Collin Sexton/Darius Garland pairing likely limits their ability to invest in another backcourt player. Johnson is raw, but a valid choice here. On the flipside, if he doesn’t shoot, he might overlap with Isaac Okoro negatively as a defense-first wing.

— New Orleans lost the 8-9-10 tiebreaker with Chicago and Sacramento, but does have a 20.3% chance at a top four pick, which would be a massive coup in building around Zion Williamson. It’s not likely, but Suggs’ toughness and workmanlike mentality would be an ideal fit for the Pelicans if they’re fortunate enough to move up.

— Let’s end with one chaos scenario, where the Kings hit on their 4.5% odds and win the lottery, the Cavs move up to No. 2, and the Raptors move up to No. 3, with the Pistons, Rockets, Magic and Thunder all moving down. This is highly unlikely, obviously. But we’ll go into left field here.

— This is actually kind of a cool scenario in that it places the top picks in great situations. A three-headed Kings backcourt of Cade Cunningham, De’Aaron Fox and Tyrese Haliburton would actually be fascinating, and might work. Evan Mobley would be exactly what the Cavs need if they’re able to move up, providing defensive cover for their guards and adding a different dimension than their returning bigs. And Jalen Suggs would be awesome in Toronto playing next to Fred VanVleet. Some of these things are more likely than others, but it’s at least something to keep in mind.

— Houston, Minnesota and Chicago all losing their picks would give Oklahoma City, Golden State and Orlando two lottery picks apiece. I’m actually not sure if three teams have ever had multiple lottery picks in the same draft before. It’s exceptionally rare, it’s technically on the table, and it creates a wide range of trade possibilities. Food for thought. 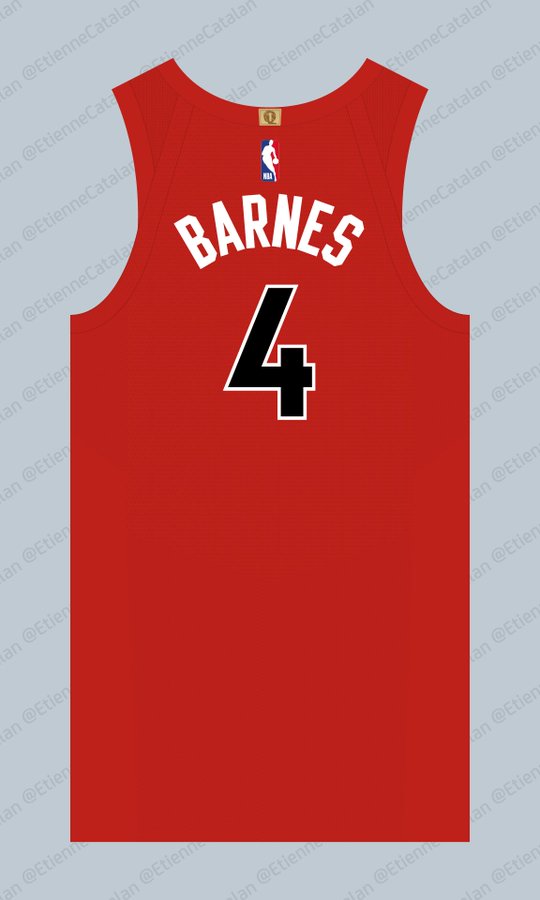